Pet-Bandanas is a reader supported site. When you buy through links on our site, we may earn an affiliate commission. Product prices are the same whether you buy through our links or not. Thank you for being a part of our community. Learn More

Cool, calm, collected are the first words that come to mind when I think of German Shepherds. This particular breed of pups is known for being intelligent and useful in several ways and is a popular breed recognized for its loyalty. But, just how well do we know this particular breed?

The following Strong German Shepperd Names have roots in history, some going back hundreds of years! 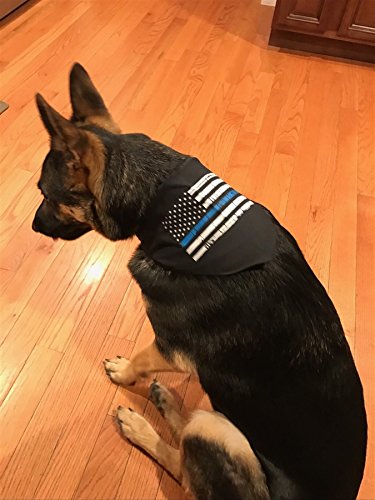 What is it that makes the German Shepherds such a special breed of dogs? And, what can I as a previous owner of one so aptly named Apollo (who sadly passed away of old age) say to persuade you into owning one yourself? Well, for one there are numerous reasons on why you should look at German Shepherds if you’re looking for an awesome family dog!

How can you identify a German Shepherd?

The German Shepherds are primarily recognized from K-9 police units and television shows. It’s how I describe them, and it’s fitting since they’re not only medium-to-large dogs they’re also an inquisitive and astute breed apt for learning all their required police techniques. Surprisingly enough, the breed is actually not that old with their origins dating to around the late 1800’s or early 1900’s.

Traits of the Breed

The color schemes of the German Shepherds (or GSD) are the common black and tan, red and black, along with some rarer ones being white and tan. They can reach a height of 22 to 26 inches in height and can weigh anywhere from 49 to 88 pounds. Additionally, there are both shorthair and a much rarer longhair version of the pups.

A German Shepherd puppy will take three years to fully mature and stop growing. However, they can be considered adults by the age of two. But, if you want to take a deeper look at their kind you’ll have to recognize their features as well:

Still, what are you supposed to do with all this information, you want to know what makes this dog special, especially if you’re going to justify your adoption to your significant other! As such, let’s cover the important questions for the family who wants to bring in an awesome German Shepherd into their midst.

Are there any variations in sizes or kinds?

Interestingly enough, what denotes the type of German Shepherd you own is their coat. As I mentioned before, Apollo was an all-white German Shepherd and I didn’t notice any difference in size when compared to a regular one. But, if you’d like to know what their types are here is a list:

Do German Shepherds Ever Have Blue Eyes?

I’ve never seen it, but I have read in the past that due to some genetic variation, a few adult German Shepherds can actually have blue eyes.  It’s also important to note that some mixed GSDs might have blue eyes although since it’s a recessive trait it’s rather unlikely. A variation of the breed known as Blue German Shepherds does exist though.

Sadly, no German Shepherds are similar to most dogs in this particular regard (which are not hypoallergenic); therefore they are not good for kids or adults with allergies to dog dander. It’s important to remember that people might not be allergic to all dogs, and it might require some trial and error.

Furthermore, keep in mind that some people can develop a resistance to animal allergies and I personally have dealt with a runny nose and eyes whenever I’m not exposed to animals for extended periods of time.

Are German Shepherds Good With Children?

Actually, yes; they’re amazing dogs for children and families. The GSD is a great breed due to their self-assuredness and energy levels. Their inquisitive nature makes them excellent protectors and they can actually become overprotective of their pack (family) if they aren’t socialized adequately with strangers as it’s not in their nature to befriend new people.

I had Apollo when I was a teenager and I still remember how fun he was to walk around within the neighborhood. He was never a troublesome pup, and while he was a handful at times, he never bit or did anything even to my friends when they first met him. However, keep in mind they have a powerful bite and if not trained properly can potentially cause some serious damage even to other animals.

Are German Shepherds Good With Cats?

Can I have both a cat and a German Shepherd? There are numerous factors that go into play for this question. When I adopted Apollo, we had

a cat in the house who didn’t like him, but he didn’t mind the cat. It’s all a matter of how you raise them as with most animals they can become territorial if they encounter a new animal. Both cats and dogs will not get along if they didn’t grow up together, or if one of them arrived as a baby.

What this means is that a German Shepherd can actually get along with a cat as long as he was raised around them or vice versa (I also owned a cat who did not mind dogs in the least). Another potential scenario is that the cat is brought in as a kitten and the GSD is allowed to play with him under close supervision. This will ensure that the very energetic pup does not endanger the much smaller kitten. By allowing both of them to get to know each other, they’ll eventually pick up on cues and social structure which will be instinctively followed by the pets.

Do keep in mind though; German Shepherds are aggressive animals especially towards animals of the same sex. They also love chasing prey and can show predatory behaviors to smaller animals that are keener to run than fight (such as cats).

The recommended answer for this is the same as before, socialize your pet well. Some experts recommend either raising them together from infancy or training your first dog well and then bringing in another pet into the house to join them from an early age. However, as I mentioned earlier, German Shepherds can be aggressive towards other animals especially if they’re the same gender.

Will German Shepherd Attack Its Owner?

This is difficult to answer as, I never had a problem with Apollo, but he was pretty even-tempered and also received lots of attention. You see, German Shepherds by nature love attention and fun, and if not properly socialized and cared for they can become aggressive (I can’t stress this enough). It’s important that if you’re bringing a German Shepherd into the household you play with them on a regular basis and help them burn through their energy.

Do keep in mind that sometimes they might bite and become destructive as a means of gaining attention (similar to small children). But, attention isn’t the only thing they need as they are also keen on learning new tricks (Apollo even learned how to open fences by himself) and mental stimulation is a big factor in raising one and preventing their destructive aspects from coming through.

Is There Such A Thing As German Shepherd With Dwarfism?

Yes, there is a miniature German Shepherd, however, this is not a good thing. Whenever someone breeds and advertises a Mini German Shepherd what they’re doing is breeding dogs with dwarfism in the family. But, while they might look cute with their short and stubby legs, they might actually come with a bevy of other problems down the line.

See, pituitary dwarfism is the same in dogs as it is with people, a genetic disorder that will affect the production of their growth hormones. As a side note, it’s important to remain aware that dwarfism is more common among purebreds.

What Should A German Shepherd Eat?

German Shepherds require high-quality food. It’s also important to feed them their age-specific food group as this will fulfill all their nutritional needs. I know most people love feeding their pups with table scraps, but trust me they don’t really need it.

But, if you want to still spoil your darling little puppy, here are a few good, but not necessarily important tips. Dog biscuits can be used as rewards during training, yogurts and certain veggies can also be given to them without much harm as long as you verify that it’s not specifically dangerous to the animal. Still, even if you feed him properly that won’t stop them from eating their droppings…

Why Does My German Shepherd Eat Poop?

German Shepherds like most dogs will eat their own poop. This is actually an instinctive behavior that is hard to change and there are actually numerous reasons why they do it. For example:

My point is nobody is really 100% certain why German Shepherds or dogs, in general, eat their own poop. But, it can be fixed with proper training. If you don’t like to see your dog eat his poop and give you kisses then be prepared to spend some time teaching him out of this habit. But, just keep in mind that it’s perfectly normal dog behavior and your dog is not going crazy.

Anything else I should know?

German Shepherds are awesome dogs, I can’t stress this enough. They’re one of my favorite breeds of dogs and I can personally attest to how amazing they are. From their good temperaments to their self-assured nature to even the way they sit cross-legged is pretty impressive for a dog. I am a huge fan of this breed if you couldn’t already tell.

Just be prepared to make some important changes in your relaxation schedule to accommodate for their energy levels and mental stimulation requirements. It doesn’t matter what color you prefer GSDs are pretty level across the board and all that matters is the color of their fur. Just make sure that you properly socialize, train, and dedicate time to your furry friend so that one day you find yourself with a lifelong companion and protector.

If you take advantage of an offer on our site, Pet-Bandanas.com may earn a small commission on purchases made through those links – at no additional cost to you. Full Affiliate information can be found here. You may also view our Privacy Policy at any time.